Tendermint is software for securely and consistently replicating an application on many machines. By securely, we mean that Tendermint works even if up to 1/3 of machines fail in arbitrary ways. By consistently, we mean that every non-faulty machine sees the same transaction log and computes the same state. Secure and consistent replication is a fundamental problem in distributed systems; it plays a critical role in the fault tolerance of a broad range of applications, from currencies, to elections, to infrastructure orchestration, and beyond.

The ability to tolerate machines failing in arbitrary ways, including becoming malicious, is known as Byzantine fault tolerance (BFT). The theory of BFT is decades old, but software implementations have only became popular recently, due largely to the success of "blockchain technology" like Bitcoin and Ethereum. Blockchain technology is just a reformalization of BFT in a more modern setting, with emphasis on peer-to-peer networking and cryptographic authentication. The name derives from the way transactions are batched in blocks, where each block contains a cryptographic hash of the previous one, forming a chain. In practice, the blockchain data structure actually optimizes BFT design.

Tendermint consists of two chief technical components: a blockchain consensus engine and a generic application interface. The consensus engine, called Tendermint Core, ensures that the same transactions are recorded on every machine in the same order. The application interface, called the Application BlockChain Interface (ABCI), enables the transactions to be processed in any programming language. Unlike other blockchain and consensus solutions, which come pre-packaged with built in state machines (like a fancy key-value store, or a quirky scripting language), developers can use Tendermint for BFT state machine replication of applications written in whatever programming language and development environment is right for them.

Tendermint is designed to be easy-to-use, simple-to-understand, highly performant, and useful for a wide variety of distributed applications.

Tendermint is broadly similar to two classes of software. The first class consists of distributed key-value stores, like Zookeeper, etcd, and consul, which use non-BFT consensus. The second class is known as "blockchain technology", and consists of both cryptocurrencies like Bitcoin and Ethereum, and alternative distributed ledger designs like Hyperledger's Burrow.

Zookeeper, etcd, and consul are all implementations of a key-value store atop a classical, non-BFT consensus algorithm. Zookeeper uses a version of Paxos called Zookeeper Atomic Broadcast, while etcd and consul use the Raft consensus algorithm, which is much younger and simpler. A typical cluster contains 3-5 machines, and can tolerate crash failures in up to 1/2 of the machines, but even a single Byzantine fault can destroy the system.

Each offering provides a slightly different implementation of a featureful key-value store, but all are generally focused around providing basic services to distributed systems, such as dynamic configuration, service discovery, locking, leader-election, and so on.

Tendermint is in essence similar software, but with two key differences:

Tendermint emerged in the tradition of cryptocurrencies like Bitcoin, Ethereum, etc. with the goal of providing a more efficient and secure consensus algorithm than Bitcoin's Proof of Work. In the early days, Tendermint had a simple currency built in, and to participate in consensus, users had to "bond" units of the currency into a security deposit which could be revoked if they misbehaved -this is what made Tendermint a Proof-of-Stake algorithm.

Since then, Tendermint has evolved to be a general purpose blockchain consensus engine that can host arbitrary application states. That means it can be used as a plug-and-play replacement for the consensus engines of other blockchain software. So one can take the current Ethereum code base, whether in Rust, or Go, or Haskell, and run it as a ABCI application using Tendermint consensus. Indeed, we did that with Ethereum (opens new window). And we plan to do the same for Bitcoin, ZCash, and various other deterministic applications as well.

Another example of a cryptocurrency application built on Tendermint is the Cosmos network (opens new window).

Burrow (opens new window) is an implementation of the Ethereum Virtual Machine and Ethereum transaction mechanics, with additional features for a name-registry, permissions, and native contracts, and an alternative blockchain API. It uses Tendermint as its consensus engine, and provides a particular application state.

Thus far, all blockchains "stacks" (such as Bitcoin (opens new window)) have had a monolithic design. That is, each blockchain stack is a single program that handles all the concerns of a decentralized ledger; this includes P2P connectivity, the "mempool" broadcasting of transactions, consensus on the most recent block, account balances, Turing-complete contracts, user-level permissions, etc.

Using a monolithic architecture is typically bad practice in computer science. It makes it difficult to reuse components of the code, and attempts to do so result in complex maintenance procedures for forks of the codebase. This is especially true when the codebase is not modular in design and suffers from "spaghetti code".

Another problem with monolithic design is that it limits you to the language of the blockchain stack (or vice versa). In the case of Ethereum which supports a Turing-complete bytecode virtual-machine, it limits you to languages that compile down to that bytecode; today, those are Serpent and Solidity.

Thus we have an interface, the Application BlockChain Interface (ABCI), and its primary implementation, the Tendermint Socket Protocol (TSP, or Teaspoon).

Tendermint Core (opens new window) (the "consensus engine") communicates with the application via a socket protocol that satisfies the ABCI.

To draw an analogy, lets talk about a well-known cryptocurrency, Bitcoin. Bitcoin is a cryptocurrency blockchain where each node maintains a fully audited Unspent Transaction Output (UTXO) database. If one wanted to create a Bitcoin-like system on top of ABCI, Tendermint Core would be responsible for

The application will be responsible for

Tendermint is able to decompose the blockchain design by offering a very simple API (i.e. the ABCI) between the application process and consensus process.

The ABCI consists of 3 primary message types that get delivered from the core to the application. The application replies with corresponding response messages.

The messages are specified in the ABCI specification (opens new window).

The CheckTx message is similar to DeliverTx, but it's only for validating transactions. Tendermint Core's mempool first checks the validity of a transaction with CheckTx, and only relays valid transactions to its peers. For instance, an application may check an incrementing sequence number in the transaction and return an error upon CheckTx if the sequence number is old. Alternatively, they might use a capabilities based system that requires capabilities to be renewed with every transaction.

The Commit message is used to compute a cryptographic commitment to the current application state, to be placed into the next block header. This has some handy properties. Inconsistencies in updating that state will now appear as blockchain forks which catches a whole class of programming errors. This also simplifies the development of secure lightweight clients, as Merkle-hash proofs can be verified by checking against the block hash, and that the block hash is signed by a quorum.

It's probably evident that applications designers need to very carefully design their message handlers to create a blockchain that does anything useful but this architecture provides a place to start. The diagram below illustrates the flow of messages via ABCI.

# A Note on Determinism

The logic for blockchain transaction processing must be deterministic. If the application logic weren't deterministic, consensus would not be reached among the Tendermint Core replica nodes.

While programmers can avoid non-determinism by being careful, it is also possible to create a special linter or static analyzer for each language to check for determinism. In the future we may work with partners to create such tools.

Tendermint is an easy-to-understand, mostly asynchronous, BFT consensus protocol. The protocol follows a simple state machine that looks like this: 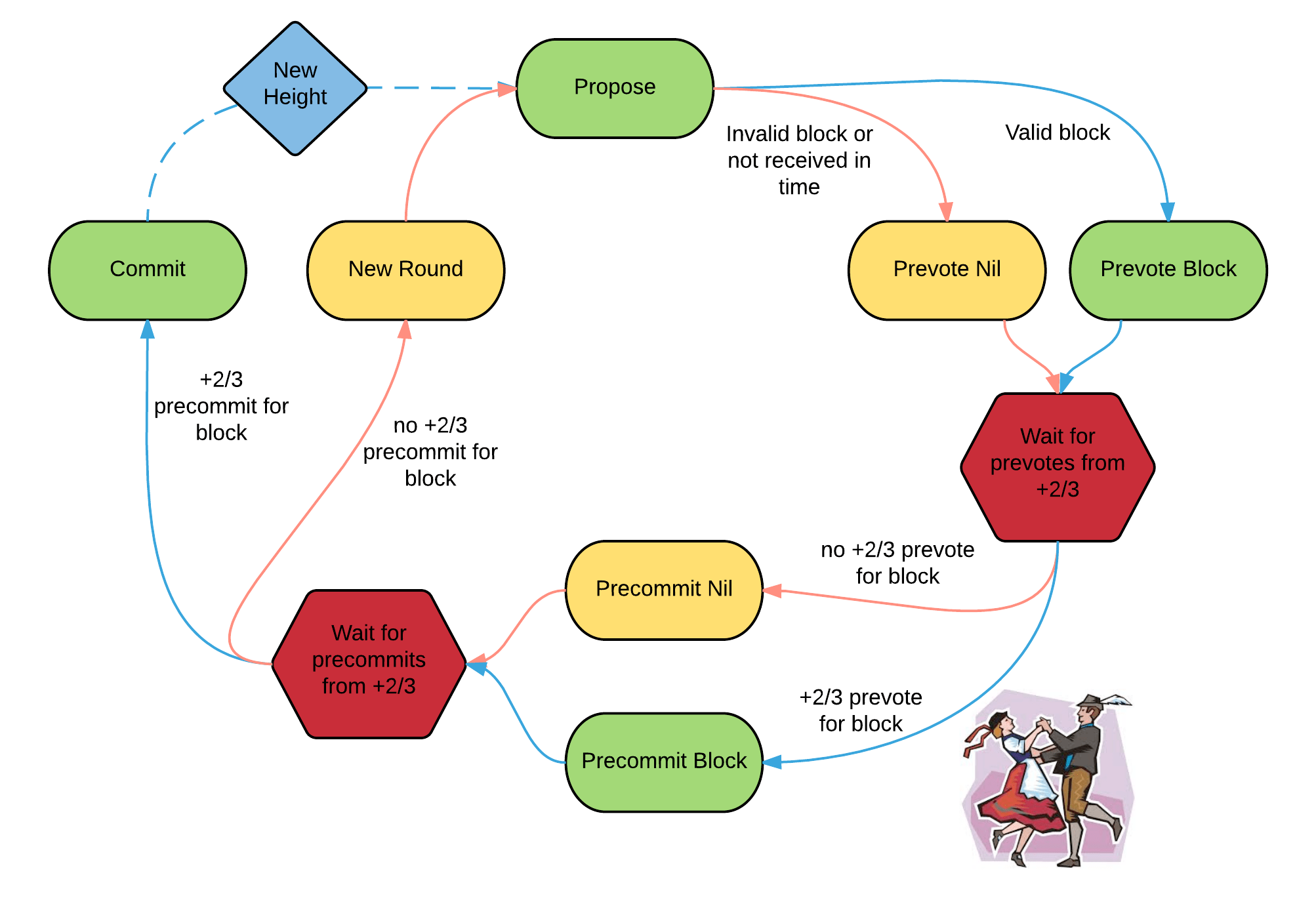 Participants in the protocol are called validators; they take turns proposing blocks of transactions and voting on them. Blocks are committed in a chain, with one block at each height. A block may fail to be committed, in which case the protocol moves to the next round, and a new validator gets to propose a block for that height. Two stages of voting are required to successfully commit a block; we call them pre-vote and pre-commit. A block is committed when more than 2/3 of validators pre-commit for the same block in the same round.

There is a picture of a couple doing the polka because validators are doing something like a polka dance. When more than two-thirds of the validators pre-vote for the same block, we call that a polka. Every pre-commit must be justified by a polka in the same round.

Validators may fail to commit a block for a number of reasons; the current proposer may be offline, or the network may be slow. Tendermint allows them to establish that a validator should be skipped. Validators wait a small amount of time to receive a complete proposal block from the proposer before voting to move to the next round. This reliance on a timeout is what makes Tendermint a weakly synchronous protocol, rather than an asynchronous one. However, the rest of the protocol is asynchronous, and validators only make progress after hearing from more than two-thirds of the validator set. A simplifying element of Tendermint is that it uses the same mechanism to commit a block as it does to skip to the next round.

Assuming less than one-third of the validators are Byzantine, Tendermint guarantees that safety will never be violated - that is, validators will never commit conflicting blocks at the same height. To do this it introduces a few locking rules which modulate which paths can be followed in the flow diagram. Once a validator precommits a block, it is locked on that block. Then,

In many systems, not all validators will have the same "weight" in the consensus protocol. Thus, we are not so much interested in one-third or two-thirds of the validators, but in those proportions of the total voting power, which may not be uniformly distributed across individual validators.

Since Tendermint can replicate arbitrary applications, it is possible to define a currency, and denominate the voting power in that currency. When voting power is denominated in a native currency, the system is often referred to as Proof-of-Stake. Validators can be forced, by logic in the application, to "bond" their currency holdings in a security deposit that can be destroyed if they're found to misbehave in the consensus protocol. This adds an economic element to the security of the protocol, allowing one to quantify the cost of violating the assumption that less than one-third of voting power is Byzantine.

The Cosmos Network (opens new window) is designed to use this Proof-of-Stake mechanism across an array of cryptocurrencies implemented as ABCI applications.

The following diagram is Tendermint in a (technical) nutshell. 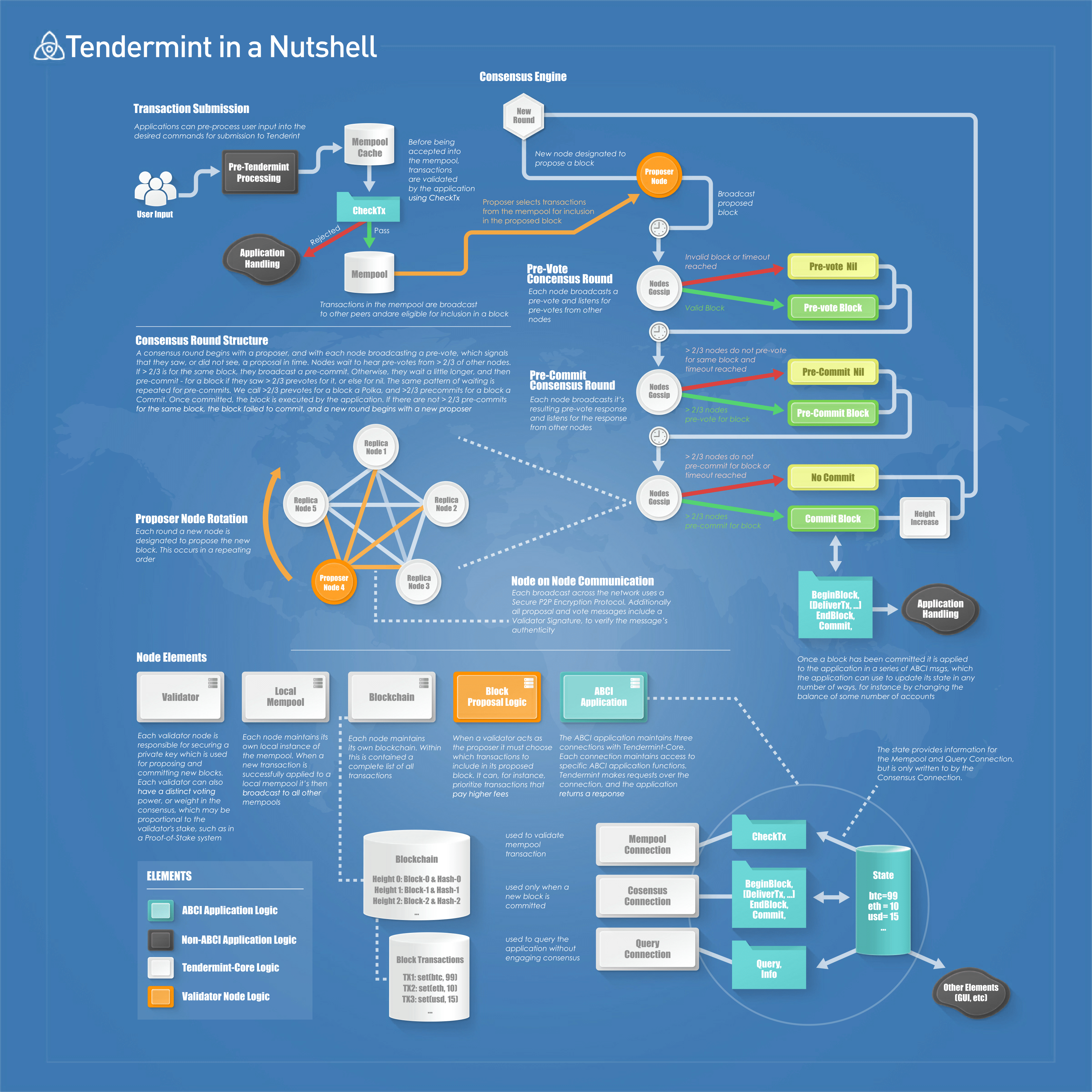 Found an Issue?
Help us improve this page by suggesting edits on GitHub.
Previous
Install Tendermint
Next
Tendermint Quality Assurance
Questions?
Chat with Tendermint developers in Discord or reach out on GitHub to learn more.
tendermint.com
The development of Tendermint Core is led primarily by Interchain GmbH. Funding for this development comes primarily from the Interchain Foundation, a Swiss non-profit. The Tendermint trademark is owned by Tendermint Inc, the for-profit entity that also maintains this website.